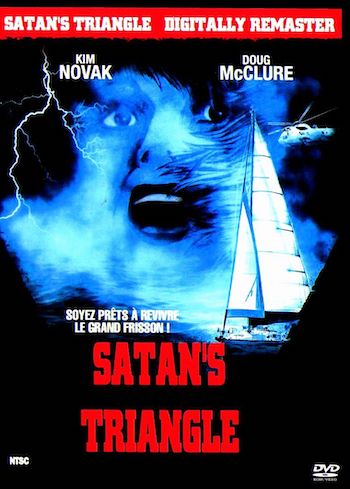 I’m not saying that you don’t pick up the priest found drifting by himself in the ocean, but when you do, you need to be smart about it. At a minimum, you probably shouldn’t keep fishing for that big marlin and the captain of the boat should be court-martialed or keelhauled or whatever it is they do to them when they are absurdly derelict in their seafaring duties.

You’d have to be suffering a bout of scurvy to think that letting a priest who looks like the crazed padre that killed himself and opened the gates of hell in City of the Living Dead taking the helm of you boat during a mysterious storm that has broken out while you are in the middle of the Devil’s Triangle is anything other than sheer lunacy!

If you just wet yourself a little bit hearing about the Devil’s Triangle, we’ll just pretend you got hit by a little bit of sea spray. It’s understandable, if like me, you grew up in the 1970s, raised on scary pseudoscience like reincarnation, ESP, ancient astronauts, Kirlian photography, bigfoot, disco, Evel Knievel and the Bermuda Triangle. Seems like we couldn’t turn on one of the three networks without seeing some TV movie of the week where some poor bastard wasn’t giving birth to an alien baby or being harassed by a coven of witches. And now we can’t even an enjoy a fishing trip with a high price prostitute played by film legend Kim Novak? No wonder Jimmy Carter was a one term president! 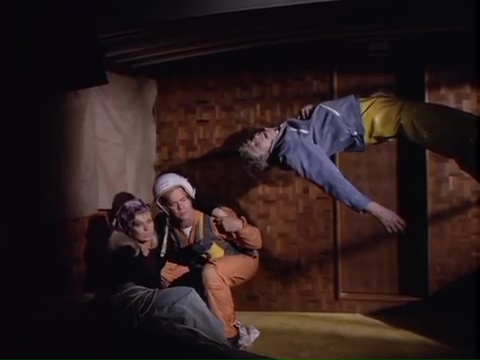 Doug McClure (in the middle of an incredible run of classic 1970s films including The Land that Time Forgot, The People that Time Forgot, At the Earth’s Core, SST: Death Flight) is a lieutenant in the coast guard named Haig. Haig is so woman crazy that while en route to a mayday call in the Devil’s Triangle, he has his pilot buddy, Pagnolini, take the rescue chopper down near the water to get a closer look at a sunbathing beauty on a ship that is not in distress.

Pagnolini is a crusty old salt who doesn’t appreciate all Haig’s womanizing, but more importantly is a man of great faith who believes there is something supernatural about the Devil’s Triangle. The carefree Haig has none of these concerns, blithely announcing that while he believes in God, Santa Claus and the Easter Bunny, he doesn’t believe in the devil, practically ensuring that Satan will be making a guest appearance this ABC Movie of the Week.

Locating the source of the distress call, Haig boards the ship and begins to investigate. Again, when you start looking around a seemingly abandoned boat and notice a dead priest hanging from one of the masts, it seems a bit shortsighted to continue to take your own sweet time searching the rest of the boat instead of hauling ass back to the basket and yanking the tow line as hard as you can to have Pagnolini bring you back up to the copter before Satan notices you’re prowling around. But while Haig also finds a dead guy seemingly floating in the air, he also finds Novak’s prostitute character Eva very much alive and though he doesn’t believe in the devil, Haig certainly believes in hot blondes! 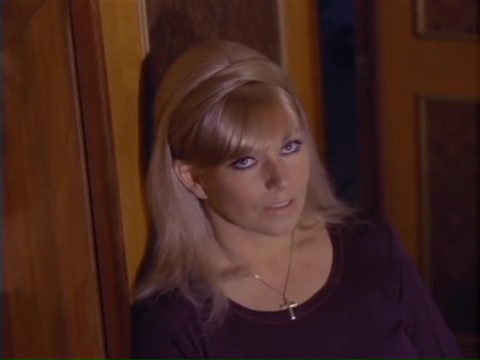 After an accident with the rescue basket forces Haig and Eva to remain on the ship until a rescue boat can arrive in the morning, Eva goes into flashback mode to explain what happened on the boat, including the story with the priest, the strange storm they encountered and what happened to everyone else on the boat.

Satan’s Triangle is another one of those early 1970s TV movies that benefits from its shorter 74 minute running time, its spooky ghost story never derailed by a half hour or so of filler like so many of its modern kin. Forced to tell its tale in nonstop fashion, the audience is caught up first in the exploration of the ship, Eva’s story and then a final act that is a fitting payoff to the 70s occult paranoia the film traffics in.

A cast full of pros obviously helps selling the goofy story (the beginning of the movie has a narrator read on screen text dubiously asserting that thousands of people go missing in the triangle and that what follows is one possible explanation) and at least the movie maintains an internal logic, Haig’s lustful ways, Pagnolini’s faith and Eva’s attempt to seduce the priest all play important parts in the story. 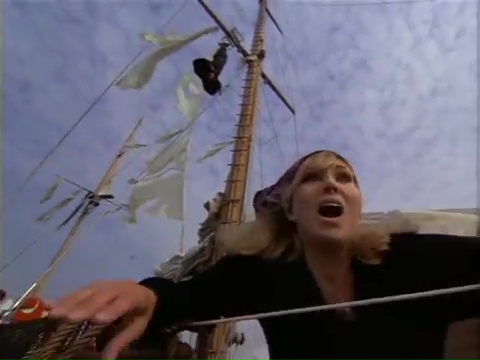 Surprisingly, there is an undercurrent about whether morality and religion still matters that runs throughout the film, a commentary on the collision between Haig and Eva’s generations views on sex and faith versus those of the establishment represented by Pagnolini and the priest. Haig even playfully complains to Eva about how “square” Pagnolini is.

Lust and its resultant casual sex are not glamorized or rewarded and there is a price to pay for it. There is also a price to pay for being a person of faith, but the ultimate outcome for not losing your faith is quite different from someone like Haig who never had any. It’s doubly horrifying in Haig’s case because you can see that he realizes the gravity of the mistake he made as everything is revealed to him and the viewer.

At once a solid horror tale and also a fascinating time capsule both of what had the public’s pop culture attention as well as its deep-seated concerns about the sea-change society was undergoing in its attitudes toward sex and religion, Satan’s Triangle is a hell of a lot more thought provoking than anyone has right to expect from an ABC Movie of the Week.