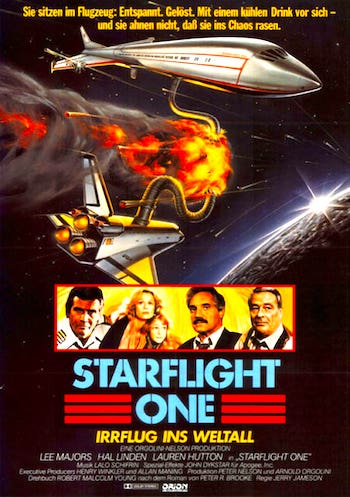 Mission Control to Starflight One, you are cleared for… disaster! It was of course inevitable what with the ominous mix of cutting edge technology, the misgivings of the designer and the presence of several minor league celebrities aboard. (If I ever notice I am a flight with Gavin MacLeod, Charo and Alfonso Ribaro, I am deplaning immediately as that’s clearly a Final Destination situation!)

Starflight One is a super fast plane outfitted with rockets that will fly to Australia in just a few hours. Designer Josh Gilliam (Hal Linden) is concerned that the rockets aren’t controlled by ground control, but with screen legend Ray Milland’s patented crabby old guy the owner of the airline, nothing is scrubbing this launch! And to be fair to him, how could he have anticipated that a passenger on board the plane would tell his own launch crew in Australia to launch that communication satellite despite the ban on launching it?

One exploded delta rocket and a significant debris field later and poor old Starflight One’s rockets can’t be shut down! We all know what happens then! If the rocket doesn’t complete its burn before they reach 450,000 feet, Ray Milland’s Q.T. Thornwell can charge the passengers a premium for an eternity of a zero G experience! 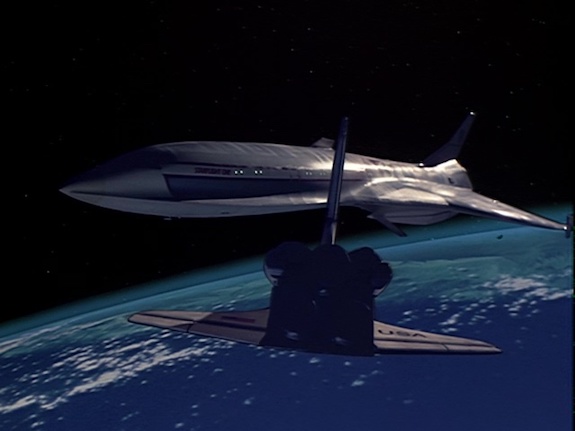 With Starflight One in orbit, a limited amount of oxygen and a decided lack of heat shield that will make a re-entry tricky at best and crispy fried at worst, things are not looking good. It is fitting then that Captian Cody Briggs (Lee Majors) is the sad sack pilot who tries to keep everyone from panicking by being as much a downer as he can.

Whether he’s referring to his plane as a floating coffin, watching morosely as the latest harebrained scheme to rescue the passengers fails spectacularly resulting in their horrible deaths, cajoling an engineer who is afraid of flying to make a spacewalk to fix the plane, or taking time off from being the lead doomsayer to apologize to his mistress that he was just staying with his wife out of pity, you couldn’t help but root for a sudden depressurization of the flight deck.

Made at the same time the Space Shuttle program was just beginning to launch missions, Starflight One understandably works the Space Shuttle into its storyline and while an early 1983 audience unaccustomed to regular Shuttle flights might not have thought too much about it when the movie aired, modern audiences won’t be able to stop laughing at the idea that you could pick up the phone, call NASA and have them launch a Shuttle five minutes later. Even more laughable is that after that happens, the Space Shuttle lands and then takes off and lands two more times, all in a matter of hours! If we had a Space Shuttle that could take off and land three times in a day, what the hell do we even need something like Starflight One for? 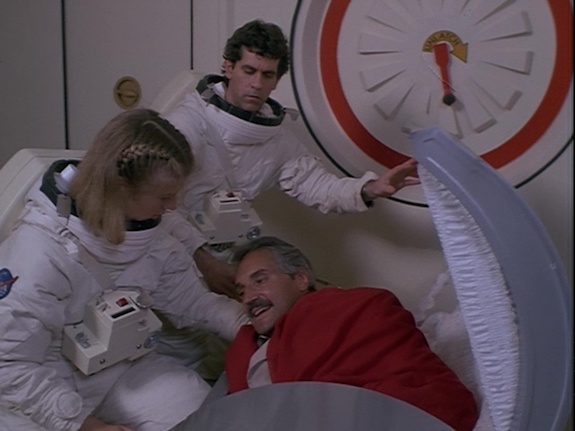 But while the Shuttle program looks unrealistically awesome, the problem solving abilities of everyone is a slow parade of fail that first involve using one flight crew member to test out a transfer by improvised airlock (result – more room in the crew cabin for Captain Briggs to flirt with his mistress), then swapping out a dead ambassador for Josh in an airtight casket to send him over to the Shuttle (that actually worked, but the movie failed by not having the ambassdor’s corpse banging into people as it floated around), and finally using a giant dryer hose connected to the Shuttle and Starflight One to have passengers crawl out of the plane to safety (until it blew up).

The plane is only saved once yet another Shuttle just happens to be cruising around the area and can act as the heat shield for the plane prompting Captain Cody to talk about riding the Shuttle’s plough-wave which is something I never wanted to hear from The Six Million Dollar Man!

Longer by a half hour than most of the era’s TV movies, Starflight One never really leaves the hangar, combining its silly “Shuttle as Space Uber” storyline with characters that have even less to them than usual in these disaster films. Nobody on the plane has much to offer. Nothing comes of the guy who had the rocket launched, the pilot/mistress/pity wife angle adds nothing to things and no one else even has a story. (I’ve read there is a story about a guy with stolen gold, but the version I saw apparently cut that which is hard to believe considering how long the movie still is.) 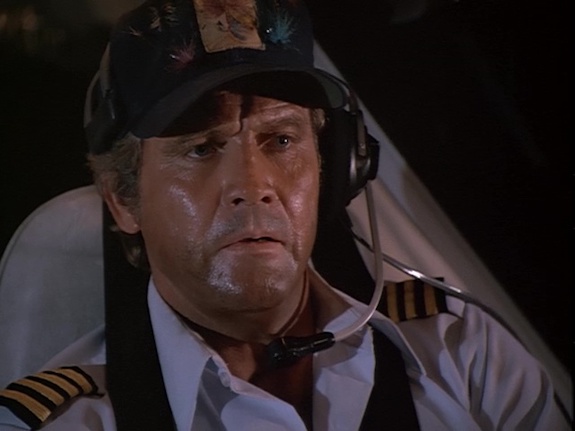 There’s even less going on at mission control which is just Josh straining to come up with new ideas to kill off more passengers while the other guys give periodic updates on how much oxygen is left and how soon the plane will burn up. Even when a plan is hatched to save everyone by using a competitor’s empty rocket and Thorwell angrily refuses, his son just ignores him and calls for the rocket instantly ending that development.

Coming at the tail end of the airplane disaster heyday, the movie and everyone in it feels like it’s just sluggishly going through the motions, its feeble attempt at updating the by-now way too familiar story by injecting the Shuttle program into it only adding to how lame it all is. With the wide selection of more entertaining versions of the story (Airport 1975, Airport ’77, Mayday at 40,000 Feet! and even SST Death Flight), there’s simply no reason not to just cancel this particular flight and board one of those instead.