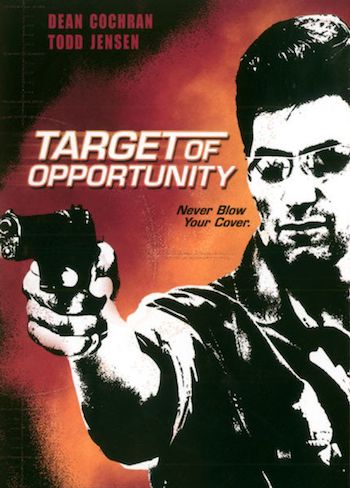 We’ve all been there. A special ops goes sideways, the enemy one step ahead of us and cutting through our unit like a buzzsaw, only leaving one or two guys left alive to reminisce/be haunted/get revenge for it years later.

While it is sad that all those guys on the team we didn’t even know got shot and blown up, it provides our heroes a much needed bonding experience that can be referenced and exploited throughout the rest of the film. And in best case scenarios like in Target of Opportunity, it allows for our heroes to develop a trademark gimmick such as the fist bump they do while talking about never leaving the other behind. Damn, these dudes are more in love than me and my wife!

Target of Opportunity ups the ante though as Jim (Air Marshal‘s Dean Cochran) takes a bullet in the leg and implores Nick (Operation Delta Force‘s Todd Jensen) to leave him because there’s no chance either will make it if he tries to help Jim. A special ops bromance though is as sacred as marriage is in the Catholic Church! Divorce is not an option! Is it going to take a miracle for Nick to get Jim safely to the LZ so they can hitch a ride back to sweet freedom? Fudge yes! Have Nick and Jim made a miracle happen before? Double fudge yes!

Remember back at Lincoln High when Nick hit Jim in the back of the endzone for a touchdown? Total miracle. Now get on your feet soldier, it’s miracle time again! 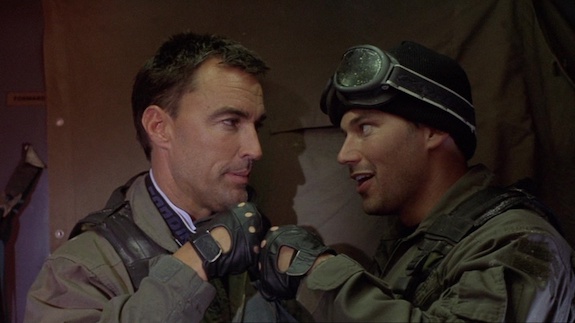 Flash forward five years later and Jim is a therapist for the Army, while Nick is involved in shady international arms deals. They meet up in a Las Vegas bar where Nick says he has to go to Bulgaria and asks Jim to take care of a suitcase for him. It’s just some insurance in the extremely unlikely event that something goes terribly wrong and Nick gets himself in all kinds of deep doo-doo.

About 10 seconds after Nick leaves, Jim gets a call from a woman in Bulgaria saying that Nick has been arrested and Jim needs to haul ass over there to save the freaking day! We know what that means – it’s suitcase time! Inside is your standard “emergency stash of goodies needed for secret mission to rescue dumb ass friend.” Cash, a myseterious debit card, a computer disc of the friend saying “if you’re watching this, I guess it’s miracle time again, bro!” and a gizmo to track the friend via a microchip he had implanted in himself.

Following a quick pitstop at the local CIA office so that the CIA can put doubt in Jim’s mind about whether Nick is dirty or not, it’s off to Bulgaria and an hour of nonstop chasing and shooting! (Little known fact about Bulgaria I picked up from this movie – the entire country is made up of flammable material!) 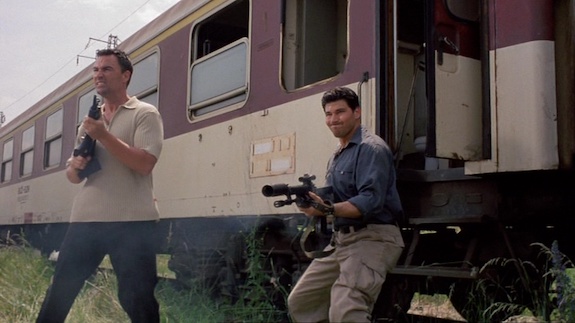 While Jim rescues Nick from the clutches of some bad guy or other in short order, his problems are only beginning because Nick claims to have caught a dose of amnesia! And we all know that amnesia is the only thing on this damn planet that could make two bros as close as Nick and Jim engage in a martial arts brawl in the damp bowels of a Bulgarian pumping station all the while black clad Eurotrash close in on them! No! That’s not the kind of fistbumping two special ops studs should be doing!

No worries though because they get tired out and just decide to take a bus together to another town where Nick manages to remember he has a safe house. And if you are following along on your “low budget action movie travel itinerary” you’ll see that our next port of call is the old abandoned train yard in town! Sure, it doesn’t sound like much, but Jim knows how to drive a train engine! Through a brick wall! A couple of times!

Finally Jim and Nick get on board an actual passenger train and meet up with Nick’s contact where it’s finally revealed that Nick is setting up a buy for nuclear material to be used in a dirty bomb. But is everything as it seems? Once Nick’s girlfriend shoots the seller in the head, a gun gets kicked into Jim’s hands and Nick starts riding on the cart with nuclear material while shooting people, it all seems pretty awesome! 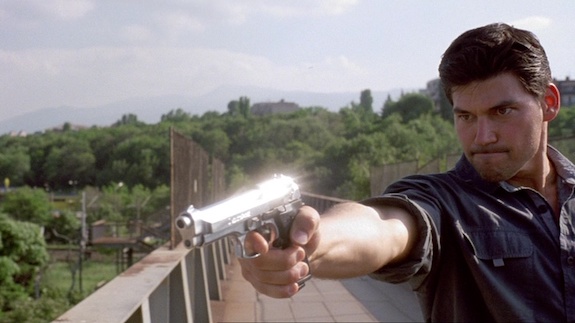 One measure of how good an otherwise forgettable action movie with guys who you barely recognize from anything else is how much completely unnecessary action and violence there is. Target of Opportunity easily handles this as demonstrated in the scene where a bad guy is shot and killed on a train engine. Regular old sucky movie would just cut to the next extra getting plugged. Target of Opportunity? Dead guy falls against a lever in the train, train starts driving in reverse, crashes through brick wall, gas starts leaking everywhere and an explosion erupts that was probably worse than anything the lame Chernobyl rod Nick was trying to buy could have done.

Target of Opportunity isn’t a great action movie. The botched mission in the prologue never figures into plot of the rest of the movie, the movie is pretty sluggish until Nick and Jim beat each other up, the overuse of slow motion in scenes where Jim is posing with his guns or jumping around can’t help but elicit chuckles and we never believed a mancrush as strong as Nick and Jim’s could ever been tainted by Nick becoming a bad guy. (They played high school football together for crying out loud!)

But lots of people are killed, guys fly through the air due to explosions, there’s car chases, a train smashing into a Mercedes, and Nick giving the finger to his CIA handler as he, his girlfriend Elana, and Jim walk off together at the end of things. What two bad ass dudes wouldn’t fist bump all that?