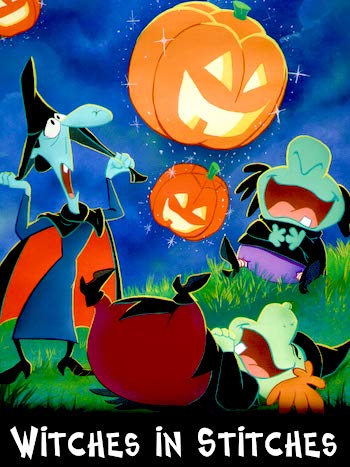 On those crybaby lists of occupations that supposedly are the most stressful, there is one significant omission that makes you question whether the pilots, reporters and taxi cab drivers just happen to have great PR working on the authors of these click bait articles. I can’t think of any other reason to be explain the absence of one of the least appreciated, most dangerous avocations to ever strap on a pointy hat and mount a broom – witches!

Don’t believe me? Ever see The Wizard of Oz? Not only does one of those poor gals have a house dropped on her head, another one has a close encounter of the melting kind with a simple bucket of water! But that’s just a bunch a of Hollywood nonsense, right? Open your history books and it gets even worse for them. Burnings at the stake were common along with stoning. Even here in the Land of the Free, they were famously put on trial in Massachusetts! It makes you wonder why anyone would ever wave a magic wand within a country mile of a witch job! Except for casting evil spells on people you hate, but you could just as well hire a voodoo priestess to do that with little to no risk to yourself.

But there is one danger above all others that positively chills all great witches right to their gnarled up bones! Something that can turn witch sisters against one another in a civil war of petty invocations that result in family members with messed up bodies and going on such a rampage on Halloween that it makes the local news. I speak of course of being banned from the annual Witches Halloween Ball! (Isn’t it always the bureaucratic nonsense that cuts the worst?) 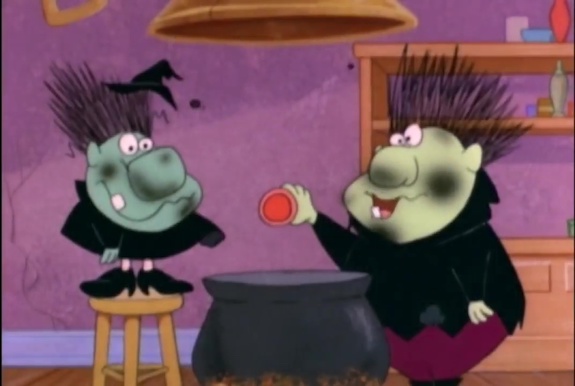 Wickie and Nelliespell are banned due to their misbehavior at last year’s Ball, the notice reads, but even worse, their older sister Abnorma is also banned for failing to keep her sisters under control. Only Abnorma cares about the ban, outraged at the prospect of missing what is apparently the biggest social event for old crones everywhere. (The first hint that Witches in Stiches was going to whiff on its premise is the film’s failure to go into the specifics of what a witch has to do to get banned from the ball.)

Abnorma’s sisters quickly make alternative plans for Halloween, delighted at the opportunity to harass the locals. The viewer is hopeful that some serious supernatural shenanigans are going to occur when it’s announced that the sisters are intent on throwing pumpkin pies in the faces of trick or treaters. It all sputters into a wistful bout of “what might have been” when the spell used to conjure up pumpkin pies instead careens wildly out of control and instead turns Abnorma into a talking pumpkin, but unfortunately leaving her shrieking voice and haggish personality intact.

Compounding the crisis for Wickie and Nelliespell is that Abnorma rolls away and is somehow lost. A search of the town’s pumpkins set out on porches yields nothing and thus the two sisters decide to go undercover as trick or treaters to get a chance to peek inside houses for Abnorma. 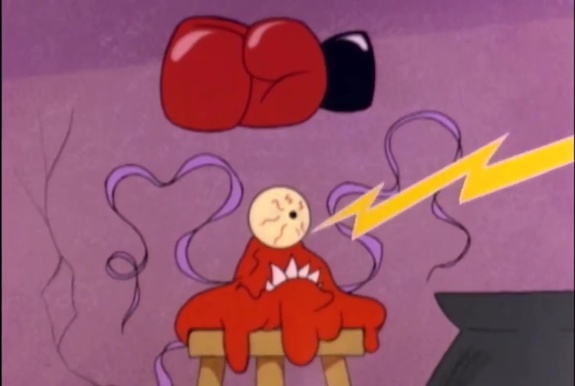 Abnorma though has a destiny other than being mistaken for just some ugly jack o’lantern since she is completely unfamiliar with the concept of keeping a low profile and shoots her mouth off to any human nearby. This leads to her getting mixed up with a boy named Arthur who is hosting a Halloween party.

Arthur complains that he doesn’t want to have a party because he isn’t popular. Proving that the cool kids totally know what they are doing by ostracizing him, Arthur takes a creepy delight in his discovery of the talking pumpkin and puts it on display for everyone to gawk at. It’s due to his aggressive marketing of his freakshow find (a large banner hanging on his house proclaiming the presence of an alien pumpkin who may be evil) that allow Wickie and Nelliespell to locate Abnorma. 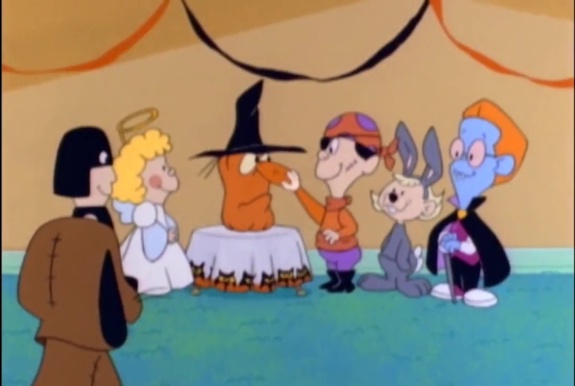 Witches in Stitches tries hard to be the outsized life of your Halloween party with all the characters’ over-the-top antics and yelling but succeeds merely as the overbearing oaf you try to avoid at the punch bowl. Absolutely no one in the story is sympathetic which makes it hard to stay interested in what’s happening. The two sisters who turn Abnorma into a pumpkin are bullies, Abnorma is quite literally a bossy hag and you can’t help but think Arthur is only few years away from picking up prostitutes to make a new suit out of women’s skin.

With a bevy of distastful principals, it falls on the story to make the film a salvagbale viewing experience, but the only interesting concept (the Witches Halloween Ball) is simply mentioned and never further explored in favor of the lame search and rescue of Abnorma that culminates in a bunch of nothing (the spell just wears off changing Abnorma back) and the resulting media coverage gets everyone banned from the ball for another 100 years. The 22 minutes of pointless obnoxiousness makes you wonder if our ancestors knew something we didn’t when they put witches on trial because these witches were definitely guilty of being a Halloween buzzkill!