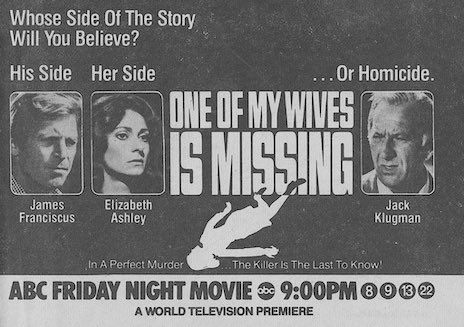 Is Daniel Corbin going crazy? A few days into his honeymoon, he reports his wife missing, but when she reappears accompanied by the friendly neighborhood priest, he claims he’s never met her before in his life!

But why does she know everything about him? And why does no one else remember the person who he thought was really his wife? And is he really seeing that head shrinker back in Detroit because of how crazy he is? And isn’t the real proof of his insanity that he continues to insist that the person husky-voiced Elizabeth Ashley is playing is not his wife even after seeing her in a succession of clingy, low cut nightgowns? I mean, unless his original wife was Farrah Fawcett, this has to be a total upgrade!

If any of this seems vaguely familiar, it’s because ABC was so in love with this concept that this was the second time in seven years they dumped a version of this story on a captive public who didn’t have access to alternatives like cable, home video or streaming services. You can almost imagine the conversation amongst the executives: we need more cheap mystery TV movies! Do we already have a story that involves people just standing around shouting at each other? We already made it? Well make it again and just swap the genders around! (To be fair, Hollywood still does this, only now spending tens of millions of dollars to do it.) 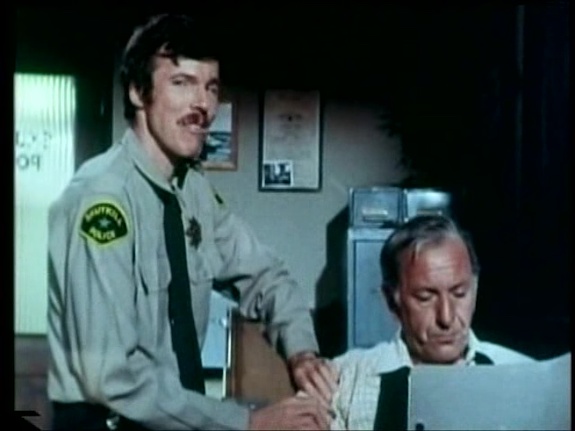 Honeymoon With a Stranger with Janet Leigh was ABC’s first go around with this version of Robert Thomas’s play “Trap for a Single Man” back in 1969. Leigh played the bride of a rich, Spanish guy who was well known for dating women and then running away. Both films feature the same basic final twist, but how they get there is quite different, the script for One of My Wives Is Missing having been reworked far beyond using find and replace for “she and “he” on it. 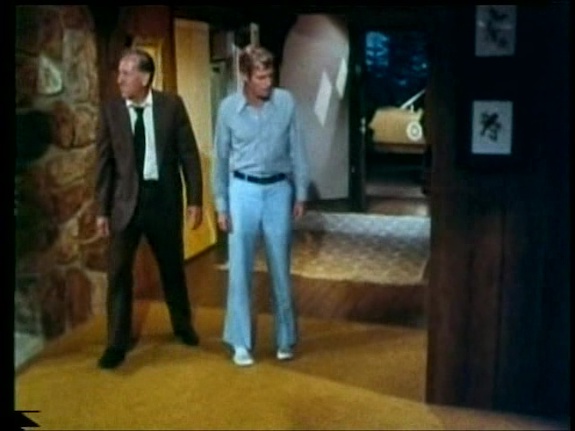 For instance instead of Rossano Brazzi’s police detective romancing Leigh, we have pre-Quincy Jack Klugman as the smart-mouth crabby city cop who retired to the small resort community to escape tough cases. He may not be Elizabeth Ashley in the looks department, but trading the love struck Brazil and his kind understanding of Leigh’s claims for the acerbic wit of Klugman whenever Corbin calls him to demand he come over to his house because he finally, no really this time I mean it, has proof that Ashley’s character is an imposter, is also an upgrade.

One of My Wives Is Missing also smartly waits until almost the last minute to finally reveal the twist, but was pretty fast in revealing to the audience and Corbin that the imposter wife was really an imposter and had no problem admitting as such to Corbin when no one else was around. It also smartly changed up the true motives of the imposter so that the audience continued to have a rooting interest once everything is disclosed. Honeymoon With a Stranger took the opposite approach, revealing the twist much earlier, but with a different motive for the imposter which rendered almost everyone unsympathetic for the last third of the movie. 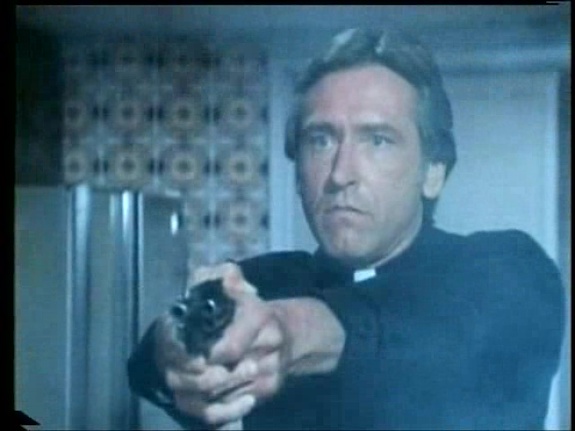 It might sound that One of My Wives Is Missing is the superior film, but Honeymoon With a Stranger has a much nastier edge to it that some might appreciate more than the more TV friendly (but unrealistically complicated) resolution to everything in this film. It was fun watching Leigh eventually match wits (and outwit) her tormentors, while James Fransiscus’s Corbin spends almost his entire film being made to look like a fool before he finally did what everyone was waiting for him to do in a frankly nonsensical sequence that I still can’t figure out why he did it, but everything worked out, so why question it, right?

Both make for an entertaining double feature and even after watching the first one, the subsequent version is so different, you won’t feel like you’re simply seeing a rehash and fresh surprises still await. I still don’t understand though why none of these people have any pictures of their spouse. Both weddings involve wealthy individuals. Wouldn’t they have hired a wedding photographer? Or at least had a friend with a Polaroid?