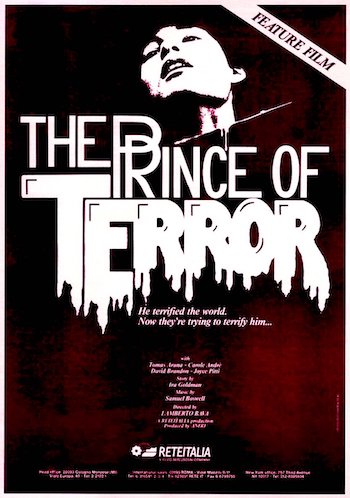 These are just some of the heavy-duty nut scratching philosophical questions horror director Lamberto Bava poses in this Italian TV movie about a horror director who is shooting what looks to be an Italian TV movie. But could questions so fundamental be possibly addressed in such a piece of entertainment so trashy that one actress starts talking about orgasms at the dinner table while a child is present?

Sure they could! And it turns out that the answers are pretty easy as well! And it was all foreshadowed near the beginning of the movie which practically proves that it’s correct! So many times in these clearance rack non-theatrical Italian horror movies (Sweet House of Horror, Touch of Death for example), you’re tempted to doze during any part where a severed head is not part of the scene. In The Prince of Terror  though, when Vincent Omen is playing golf and giving an interview to an idiotic reporter, it provides the key to everything that transpires in the film. Any weekend duffer worth his salt would tell you that Vincent Omen was the devil himself once we get a look at his golf ball. It has 666 on it! Yeah, we’re talking a hellball situation here! 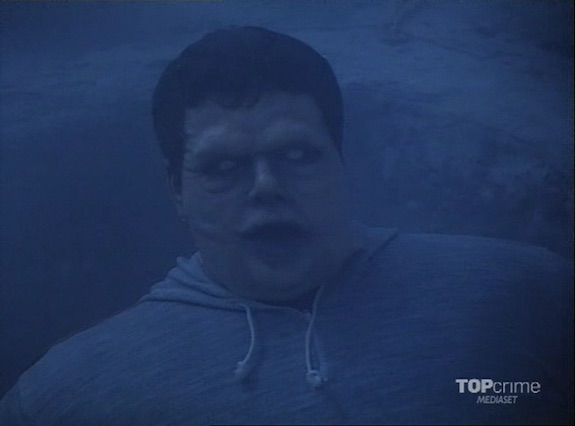 It’s undeniable that Omen and his family suffer quite a number of traumatic experiences during the movie. Omen gets shot, his wife gets her ankle caught in a bear trap, she gets violated and menaced with a chainsaw, and their daughter even gets buried alive in the basement. Still, it’s the stolen golfball that is clearly the atrocity that hits the closest to home for Omen. How do we know this? Because once he finally takes his revenge, he does so by whacking the bad guys repeatedly with golf balls!

I never thought I would ever find a guy teeing off with a bunch of golf balls to be a cathartic experience, but the oft-maligned Bava does a great job of setting things up so that as soon as Omen smacks a ball and it goes straight through a guy’s eye, you’re right there cheering him on! The second bad guy doesn’t fare much better as he takes shots off his body and head again and again, including a spectacular moment where he knocks a gun from this guy’s hand by blowing up the guy’s wrist with one of his golf balls! And just to rub it all in, he even starts hitting this guy by ricocheting his shots off the wall! 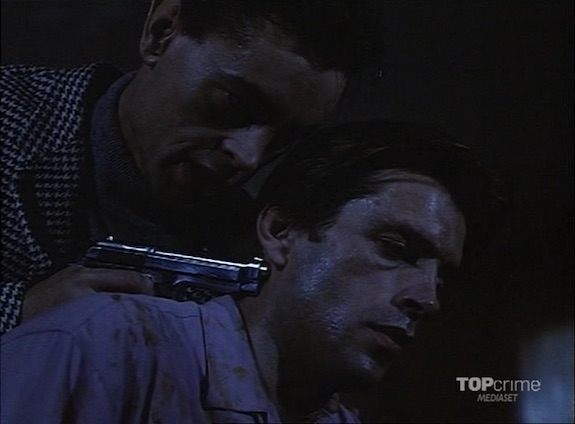 It’s a great pay off for having to suffer a mostly stupid affair that sometimes felt a bit self-indulgent what with the storyline of a conflict between the film director and the screenwriter he had fired. Was I supposed to think that the horror director, the Prince of Terror, of the title was supposed to represent Lamberto? Was this his and screenwriter Dardano Sacchetti’s swipe at some other author Lamberto worked with? Was he trying to say that just because he makes nasty movies, doesn’t mean he himself is weird? (Except that the movie goes out of its way to hint that Omen might just be the devil or at the very least a really weird guy with an abnormally awesome golf swing.)

All that metaphoric mumbo jumbo is quickly forgotten though once our disgruntled screenwriter materializes on the golf course with a catchers’ mitt and swipes Omen’s devil ball. From there, it’s a series of poorly thought out (but kind of unintentionally funny) moments where he terrorizes Omen’s family with his partner, a disgruntled actor he dug up from a movie they all worked on several years before.

You’ll barely have time to wonder how he managed to find another guy as crazy as he was in the short amount of time between getting fired and showing up at Omen’s house to harass him because you’ll be wondering just how he was able to sneak into his house and clog up his toilet with that movie script so that the toilet spewed forth gallons of red water. 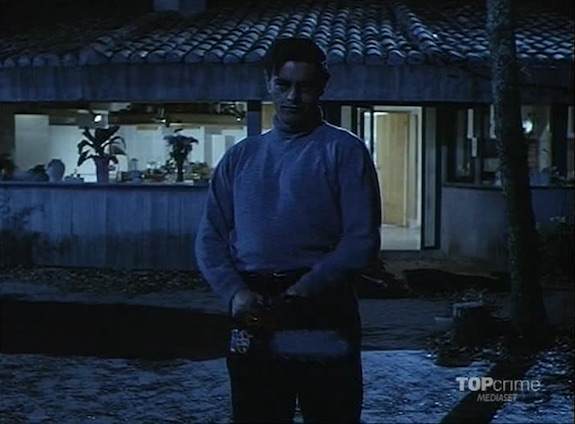 And when they went down in the basement to wall up the daughter, you’ll be asking yourself how in the world they had time to haul an enormous load of bricks down into the basement and mix up all the mortar, let alone stand down there and build a rather sizable brick wall while the girl’s parents are just milling around somewhere else in the house. I guess they were banking on the fact that the parents would be too stupid to take the time to call the police. Which of course they were.

And I don’t even want to know how or why the screenwriter go a hold of the lifelike robot dressed as a security guard. (He claimed it was from a prior film, but why would the writer have access to it? And what happened to the regular security guard? Doesn’t he have to check in with someone, sometime?)

Apparently, the screenwriter was acting out parts of scripts, but other than burying the girl alive, it just seemed like he was pulling stupid pranks like firing a gun with blanks and pretending a mannequin’s head was Omen’s wife head. It’s pretty dumb since it requires the screenwriter to suddenly become a special effects expert, but once you realize that the movie wants you to believe that the Devil really exists and he is here on Earth making bad horror movies, it doesn’t seem like the dumbest part of the movie. Still, that would explain why watching some of these movies feels like you are burning in hell while Satan shoves a rusty golf club up your bum.