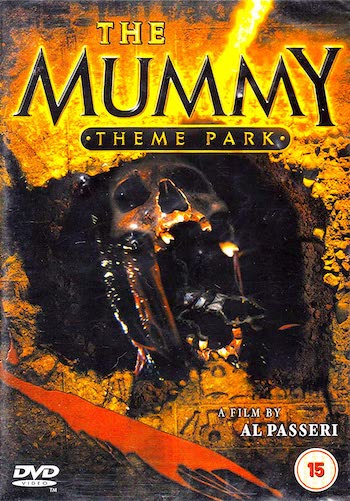 When I first heard there was something called a Mummy Theme Park, I was like “where the hell do I sign up for a season pass?” I was imagining all the good times my family and I would be having on the Tutankhamen Twister, getting some mini golf in at the Sphinx Links, and enjoying a repast of Horus d’oeuvres while washing it down with some Scarab Beetlebeer. It was going to be like going to the Harry Potter theme park, but with bad ass mummies lurching here and there instead of snot-nosed British gits waving wands in your face.

But then the movie started and I felt like I was being put through the beginning stages of mummification. You know, the part where you get a rod shoved into your cranial cavity so the brain can be broken up and run out of your nose. It was like that. But worse.

To be fair to director (which is a hell of lot more than he was to the audience) Alvaro Passeri, the story for Mummy Theme Park sounded like it could have been so idiotic that it might generate some laughs. An earthquake in Egypt has opened up a chasm in the Earth revealing a large necropolis full of mummies and other ancient Egyptian bric-a-bac. A rich sheik pours all sorts of money and technology into the area with the intent of turning it into a theme park that he’ll charge visitors $100 to visit. But in classic anti-capitalist fashion, some ancient communist doesn’t want the theme park to open and will use all her magic powers to stop it! 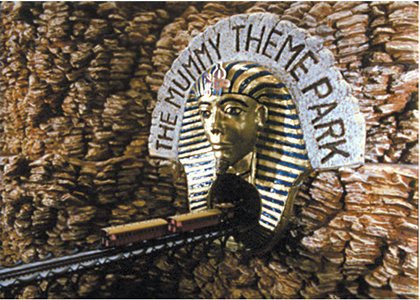 A successful low budget filmmaker knows how to get the most out of his resources. Effects, locations, and actors may not always be top notch (or middle notch for the matter), but the experts can camouflage shortcomings, scale back their vision, and play to the strengths of his performers (for instance, you don’t hire Olivier Gruner to recite Shakespeare, you have him kick the crap out of stuff). From the very beginning, Passeri did the exact opposite of all that. Remember that episode of Seinfeld when George did the opposite of everything he normally would and found great success? Well, Passeri ends up with the exact opposite of success with Mummy Theme Park.

Generations from now film scholars will still be debating whether any film had as many bad special effects in it as The Mummy Theme Park. Almost every single shot involves some combination of horribly composited green screen scenes, unconvincing models and cheesy props. Establishing shots are people standing in front of a still shot of a fake looking palace. Much of the shots inside the sheik’s palace appear to be still photos with the actors spliced into the background leading to strange staging where we never see the actors walk forward into the room, only switching from the long shot to a close up. Additionally, the furniture in the stills isn’t scaled to the actors so things like chairs look tiny, like the ancient priestess used a shrinking ray on them. 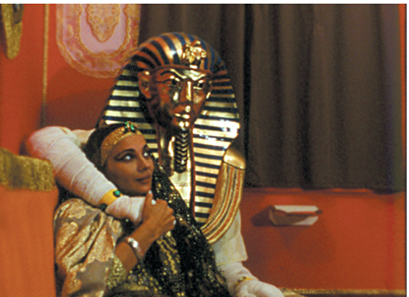 But if the palace shots were so amateurish, you’d even criticize your kid for shooting them like that, everything else in The Mummy Theme Park was like a masters class in talentless filmmaking. Watching the model railroad train unconvincingly break through walls while people pretended to jump out of the way, or seeing our two heroes run back and forth in front of the same background over and over again, or having to sit through their train ride while Sheik prattles on and on about all the concession stands (Really! They stopped and ordered drinks and popcorn at one!) made me wonder whether the real film crew died as a result of King Tut’s curse and Passeri randomly picked up a camera until the film ran out.

But don’t let Passeri’s senseless addiction to humiliating himself by constantly showcasing his lack of technical prowess distract from the fact that the story feels pretty much made up as it goes along. The sheik has a microchip he puts into the mummies so that when light hits them, they come alive and talk (in English!) about themselves to entertain park guests. Putting aside why you would waste such technology on a theme park that doesn’t even sound entertaining, wouldn’t it have made more sense to just hire people and put them in mummy costumes? I mean, surely he’s seen enough movies where monsters are chained up to know that they always break free and kill stuff. 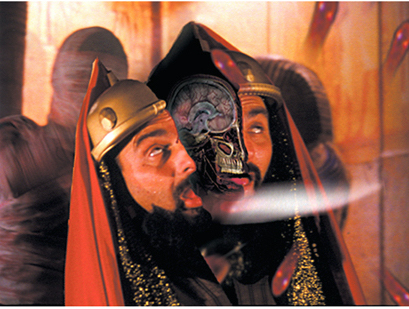 The expected rampage occurs and is handled with the same decided lack of aplomb as everything else (try not to laugh when the mummy is superimposed on top of the model train) and our heroes (photographers contracted to take pictures of the new park) make their improbable escape with one of them plugging her laptop into the train’s control system and overriding the controls! Thank god they were both using Windows 95 or whatever!

But while those movies were by no means that good, they also weren’t so aggressive about being so damn stupid and technically incompetent. This is especially appalling since The Mummy Theme Park was made in 2000, not 1966! An embarrassment of such staggering proportions, the abject horridness that is The Mummy Theme Park will unfortunately be likely remembered even after the pyramids themselves are swallowed by the sands!