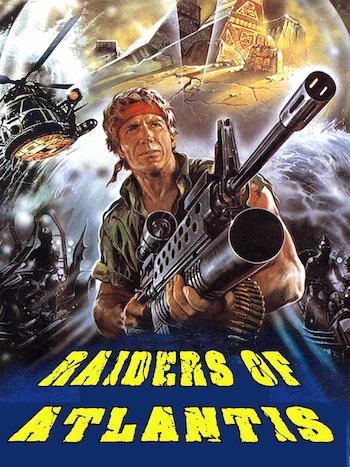 I worry about Atlantis. A lot. In all the discussions about all the cool ways civilization will end (gamma ray burst, nuclear war, plague, cows farting too much), there is a strange, unsettling silence about the possibility of the reemergence of Atlantis ending life as we know it!

And it isn’t like Atlantis is some brand new threat just thought up by liberals trying to raise your taxes. It’s been around for 2400 years since Plato invented it to make some political/philosophical point no one cares about!

So how come we aren’t seeing a bunch of specials on the PsuedoHistory Channel about the danger of Atlantis to Mankind? It’s always alien invasions when the deadliest invasion of them all is going to come right out of the ocean (and stinking to high heaven, no doubt!) with all their superior technology and angry antipathy toward us dimwitted surface dwellers!

Ruggero Deodato to the rescue. Deodato, who also alerted the world to the dangers of telephones (Dial: Help), washing machines (The Washing Machine) and twin hunks (The Barbarians), brings all his skills (setting stuff on fire) to bear on the most important film of his career, one that is both mindnumblingly entertaining (most shots of Molotov cocktails being thrown in any film ever!) and a wake up call to a sleeping public, who probably never considered that the super advanced crabby turds of Atlantis would somehow put their plan in to action with post-apocalypse biker gangs! 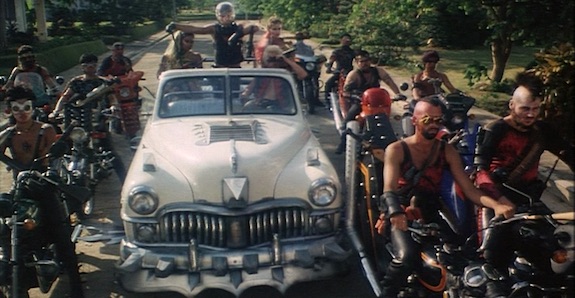 If you were worried that the Atlantis invasion was going to be carried out by eggheads in white togas waving crystals here and there and talking about harmony and scientific advancement, you most have had that portion of your brain where co-writer Tito Capri’s credits reside lobotomized by one of those Atlantis statues that shoot lasers out of its eyes.

Capri is also responsible for scripting such Italian futuristic flotsam as 1990: The Bronx Warriors, The New Barbarians, Rush (who knew Rush actually had a writer?) and Alien From the Deep! It’s obvious then that The Raiders of Atlantis is going to be heavy on dudes riding motorcycles with spikes and a minimalist, but entirely silly scientific explanation for whatever in the hell it is we’re watching take place.

The Raiders of Atlantis is the sort of movie where you spend the first half of it waiting for it to make sense and the last half of it not worrying that things seem to be occurring without reason. For instance, why did the Atlanteans take the time out of their invasion to put a metric shit ton of make up on the captured Kathy and do her hair? Why did the boat captain suddenly go crazy and start working for the Atlanteans, but no one else in the group did? Why were the bikers destroying a town on an island? And if the Altanteans could somehow control all sorts of people, how were they still stupid enough that they needed Kathy to decipher the mysterious tablet with all their lost knowledge on it? Don’t worry about any of that, just enjoy all the dudes jumping off a helicopter onto a bus and getting killed by star Christopher Connelly and his pals. 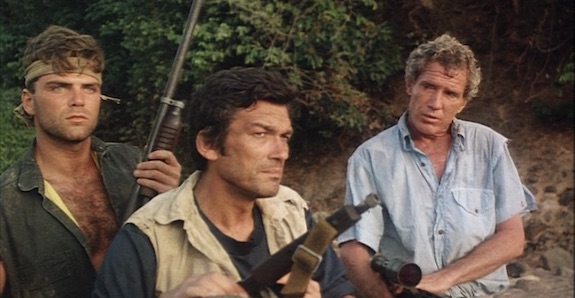 Connelly is a reassuringly familiar presence (Manhattan Baby, Jungle Raiders) who at least dubs his own dialogue (Kathy’s dub job is particularly obnoxious) while Italian regulars Ivan Rassimov and George Hilton help bolster a cast whose main purpose seems to be getting killed periodically. (Of the three regular people Connelly’s group encounters on the island, one gets burned alive by a flame thrower, one gets an arrow in the head, and another gets shot in the head. Not to be outdone, Connelly shoots people, chucks a grenade, decapitates a motorcyclist (the fleeting glimpse of Connelly’s facial expression when this happens is priceless), and sets up one of those spiky jungle death traps and cheerfully explains that having the victim avoid the obvious trap only to fall victim to the second trap is what’s known as a “confidence builder.” Don’t you almost feel bad for these underwater losers?)

To try and describe why any of this is happening runs the risk of folks claiming you didn’t really watch the movie and just made it all up because no movie could be both so haphazardly stupid and serious about it all. Our heroes Mike (Connelly) and Washington just get done kidnapping a guy for money and decide to let the heat cool off by taking a vacation on their yacht. At a nearby oil platform, the mysterious tablet has been found and they’re trying to raise a submarine. Then everything gets destroyed, biker gangs appear in the town and start killing people, and Mike rescues the scientist Kathy and some of the other people from the oil platform. There’s also a large island with a dome over it that emerges from the ocean. 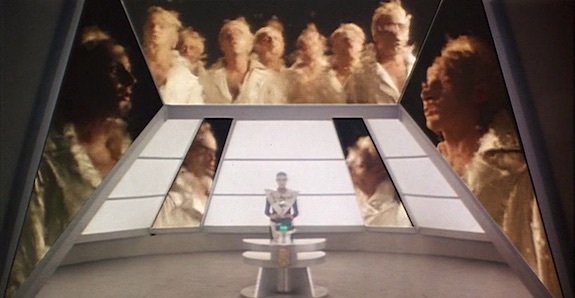 Later exposition puts forth the theory that Atlantis was destroyed in some nuclear conflict, that the Russian sub with its nuclear missiles caused the island to rise due to the radiation and that the Atlanteans want Kathy to translate their tablet. And the biker gangs are called Interceptors and work for the Atlanteans. And the Atlanteans want to get rid of humans. And it’s fixed when a guy goes into the submarine (conveniently run aground on the island) and does something with the missiles so that the island sinks back into the sea. And just so you don’t get optimistic that at least you’ll get see a really cool Atlantis, all you get is two rooms and a hallway with large fan.

But is anyone watching an Italian film called The Raiders of Atlantis for intricate and intelligent plotting? Or are we trying to see what our evil cousins who live on the bottom of the ocean, might possibly be up to? And also to see hundreds of extras killed in a variety of ways?

You’ve got to take a “big picture” view of this film because the details are either nonsensical (Why does this small island have all these powerful kick ass weapons? They’ve learned to expect trouble!) or absurdly lazy and predictable (When Mike mentions he’s had a few lessons in flying helicopters, you immediately know the pilot is going to die and Mike will end the movie trying to fly the helicopter).

Still, every doomsday prepper needs this movie in their arsenal in case the worst case scenario (Atlantis edition) happens and also because the movie is really 88 minutes of nonstop killing, mayhem, fire, and cheesy throbbing music. (Special mention of the theme song “Black Inferno” must be made as it ranks just below the theme from Yor, the Hunter from the Future in being both criminally bad yet quite catchy.)