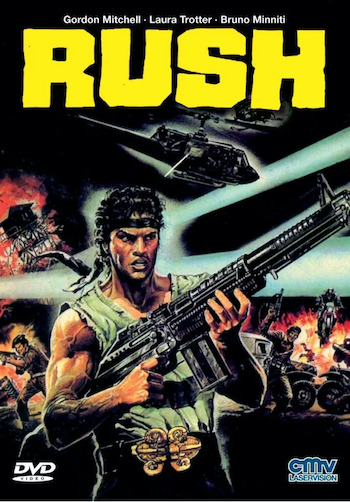 For the cost of what you or I might spend on a luxury sedan, an Italian filmmaker in the 1980s could effortlessly crank out 75 minutes or so of nonstop violence, deranged dubbing, limited sets (woods, factory, plastic greenhouse) wrapped in a story that only didn’t make even less sense because it was simply so minimal. (To give you an idea of how challenged the storytelling was, a good chunk of the background information was delivered in a melodramatic voice over at the beginning of the film, but only told us what we already knew – it’s a post-apocalypse Earth! I could have figured that out as soon as I saw Rush’s leather vest and little black headband!)

The only other part of the story we get is from a conversation between genre legend Gordon Mitchell (The Giant of Metropolis) as Yor (no relation to Yor, the Hunter from the Future) and his botanist second-in-command. Yor is trying to grow plants in radioactive soil and will keep this ability for himself so that he can somehow be all powerful. The problem is that the contamination of the Earth has finally almost disappeared and test plants are able to grow in the wild on their own. So no one can ever know! 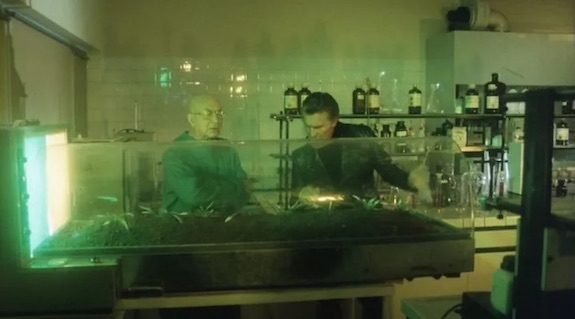 Yor has a group of infected people imprisoned as his gardening slaves who he forces to work in his greenhouses tending to the weeds he’s trying to grow. He also has an entire army of heavily armed men running the operation which includes vast tunnels of military equipment, giant factory complete with all sorts of water retention pools, and the technology to execute people by freezing them in a specially designed chamber! With all those resources, no wonder he’s got time to try and prefect his green thumb!

Yor sends his army out into the radioactive cities to capture mutants to fill his slave work force and it is during one of those raids that Rush gets himself captured. Rush is different than all the other dirty mutants though! For one thing, he’s in such good shape that he must have somehow keep his gym membership during the nuclear holocaust that surely interrupted so many others’ workout regimes. Another difference is that he isn’t contaminated like everyone else who lives in the wasteland.

But what is Rush’s secret? Why is this leatherclad kung fu muscle god immune to the effects of the nuclear fallout that took a giant glowing dump all over the land? The movie is silent on this issue (it’s too busy having Rush kill stuff!), but I don’t think it’s too much of a stretch to assume that he was likely protected by the liberal application of all that oily bronzer he uses on his smooth chest! Dude was positively glazed! 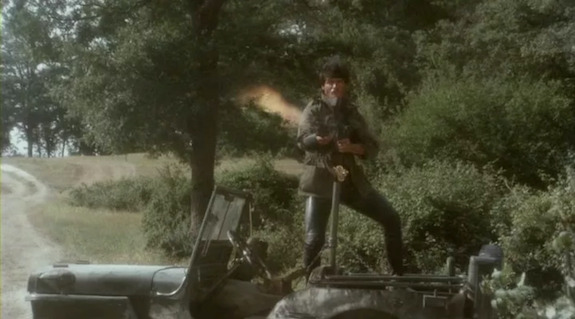 Something else about Rush that Yor doesn’t know proves even more deadly than taking a big deep breath of nuclear annihiliation though! You know that poor bastard you froze to death and showed to Rush as incentive to cooperate, Yor? Rush’s brother. Oops.

Yor quickly discovers that World War III was only the second worst beat down ever unleashed on the world! Rush wastes no time in rallying the slaves to revolt, escapes the compound, fights off platoons of guys with improvised traps, jumping his motorcylce over stuff, grenades, hand-to-hand ass whippings and ramming a tractor into a military transport! Rush even commandeers a machine gun, rakes a bunch of guys with it yelling “die!” again and again at the top of his lungs! And then he gets serious and heads back to the military base to find Yor!

Yes, nothing about Rush is well done. The stunts are strictly low rent, unconvincing and poorly edited. For instance, the motorcylce jumps vehicles with no ramp, Gordon Mitchell’s stunt double is laughingly obvious during his battle with Rush and explosions frequently result in a lot of smoke and nothing else. Story elements are raised and never followed up on with shocking regularity (Rush’s past, Yor’s interest in Rush, the robot soldiers used in the city, but nowhere else) and Yor’s scheme to dominate the post-apocalypse nursery business seems especially pointless since the last half of the movie takes place in the woods with gigantic trees and plants everywhere. 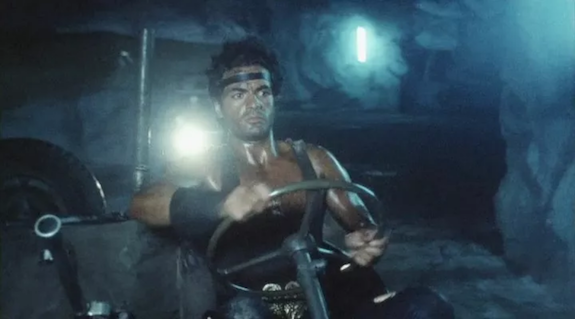 Rush doesn’t fare any better since his plan to take down Yor succeeded, but it also succeeded in getting all the slaves he cared about killed and saw him waste valuable time driving a jeep back and forth over all the plants Yor had. Damn Rush, are you the pettiest hero ever?

Add in performances like Mitchell’s Yor glowering and snarling about how he’s the lord of the world, calling his gal pal a prostitute and then choking her to death for screwing up her plan to turn Rush to their side and Bruno Minniti’s uncomfortably pretty Rush assuming his silly kung fu poses, affixing his face with unnatural expressions whether it be the strange grimace or sneer whenever he’s shooting someone or a chillingly crazed grin when the movie ends (that fades into a shot of a healthy plant!), it’s clear that the only thing “well done” that was ever on the movie’s agenda was Rush’s tan.

And if it seems like all the technical ineptitude and plot deficiencies made the movie feel like a rough draft of a movie that might ultimately be marginally less crappy, Minniti and Ricci rent out a rock quarry and do the apocalypse all over again in the following year’s A Man Called Rage!