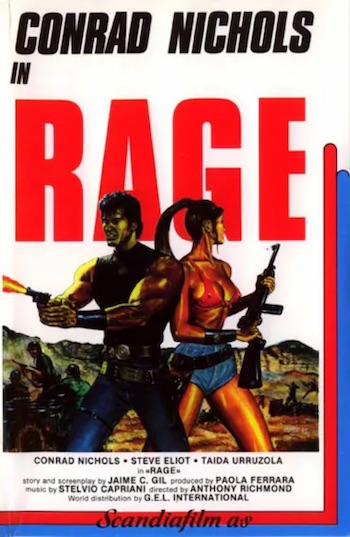 And then it’s time for Director Tonino Ricci to bring his uniquely personal vision to the aftermath! A personal vision that looks like a Cirio H. Santiago movie (think endless shots of rock strewn desert), but without all the colorful mutants, midgets, and guys dressed up like they were into Mad Max cosplay. In short, the terrifying unimaginative (and by extension, quite budget friendly) vision we saw from Tonino the year before in his film Rush! But now we’ve upgraded our hero from a bad ass named Rush to a raging bad ass named Rage!

Rush of course was pretty great what with him rousing a slave people to revolution and freeing them from a harsh life working in the bad guy’s green house. (That Rush also got a healthy majority of them killed is just a testament to the sacrifice necessary to wage a military campaign where you have to drive back and forth over saplings and tear up a dude’s garden.) But as fearsome as that guy was fighting the flora and fauna, he was not a man called… Rage! 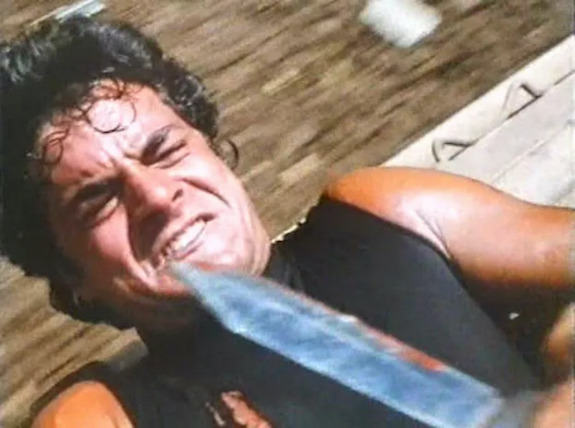 It’s just another day in the post-apocalypse. Soldiers have invaded the burnout town, terrorizing the scum still inhabiting it and searching for Rage. What impressed so much about this opening sequence is that it was basically the same scene as when soldiers invaded a burnout town and battled to capture Rush, but Tonino Ricci went ahead and shot it again anyway!

And while we didn’t get evil robot soldiers for the hero to disassemble this time around, we got the always surly and sneering Werner Pochoth (Wartime, Brothers in Blood) leading the raid! Yep, freaking upgrade! Especially since he has to team up with Rage later on for the big mission to recover life saving uranium from Alpha Base on the other side of the Forbidden Lands! Did you just post-apocalyptically soil your radioactive leather pants? I know I did!

After killing 20 or 30 soldiers, Rage is captured and brought to Gamma Base where he listens to a radio transmission received from Alpha Base. The leader of Gamma Base says that Alpha Base has the uranium needed for everyone in Gamma Base to survive and will Rage pretty please lead the mission to go get it? Putting aside the question as to what exactly it is about uranium that will save everyone (I’ve never been through a post-apocaylpse so I won’t second guess them), Rage just flat out refuses to do it.

Why should he save the ingrates at Gamma Base when they wouldn’t let him and his unit into the base back when he was Captain Rage in the army? He doesn’t care if these people die! After all, he’s a man called Rage! Then the leader, Werner, and a woman stare at him for about ten seconds. And he smiles and says “ok, I’ll do it!” But I won’t criticize Rage for pussing out because even the ragiest of us cave in when people guilt us with their sad puppy dog stares! 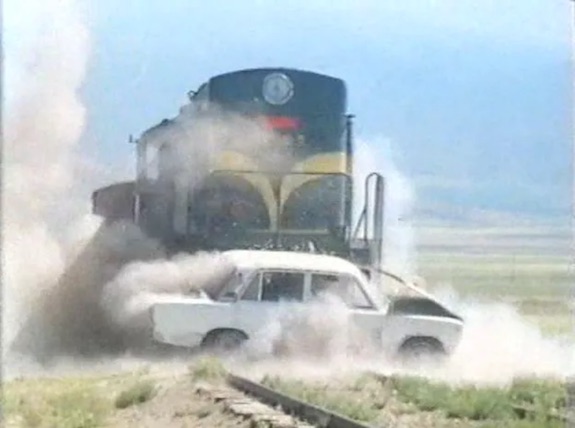 Besides, how could Rage turn down a job that had him leading a crack team of Armegeddon warriors like Werner, Omar (the fat electronics expert who provided a bit of comic relief) and Mara, a gal dressed in Dasiy Dukes and tiny tank top as if she was on her way to a charity car wash for her wasteland sorority. After ten seconds of training Werner with a knife and getting punched out by Omar, all was ready for the departure of the Ragetastic Four! Next stop: Rage’s old army buddy/enemy Slash!

Slash is the villain of the film, but you can’t really blame him since Rage gave him the scar on his face years ago that gave rise to his nickname and because Rage doublecrosses him and steals maps of the wasteland from him after pretending to make a deal with him! Rage knows Slash will go after him and attempts to stay one step ahead of him as he races to Alpha Base.

Luckily, not much happened to the Ragetastic Four despite Rage’s earlier promise that the Forbidden Land was filled with mutants, cannibals and who knew what else. There was a 20 second battle with some fur-wearing morons (accompanied by wholly inappropriate peppy electronic music), an encounter with a friendly tribe and a few minutes where they worried about finding fresh water (they did). It really wasn’t any worse than that one time I drove across Kansas.

Despite its grandiose Space: 1999 sounding name, Alpha Base is a room in a cave with a pot of dry ice giving off smoke surrounded by ancient artifacts like books and VHS tapes. Watching the Ragetastic Four drool over old videotapes about construction really drove home how painfully lame the post-apocalypse could turn out to be. But then a door opens and they see a cryogenic chamber! 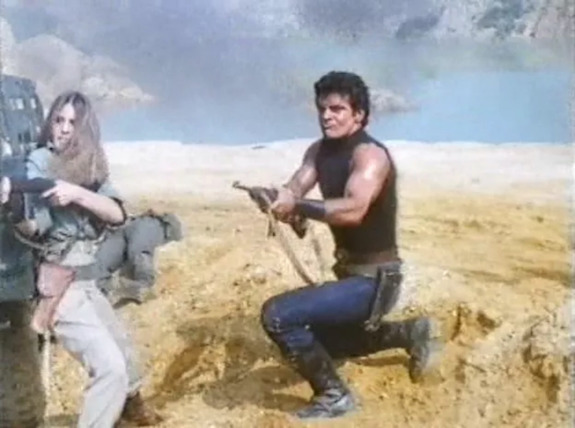 What could be inside it? A sleeping genius who could rebuild the world? A beautiful uninfected woman who could repopulate the world (or at least make Rage’s trip worthwhile for about five minutes)? Or maybe it’s a laboratory experiment gone horribly wrong that’s going to wake up super hungry! Nah dude, it was just some seeds and a big gaudy Bible. By this time, I totally get how Rage is probably just too apathetic about it all to even be a man called Disappointed.

But he would have one last change to Rage! It all went down on the train he and the rest of the Ragetastic Four found near Alpha Base that was still gassed up and in working order. While being attacked by one of Slash’s thugs aboard the speeding train, Rage gets his skintight black muscle shirt ripped by a knife. For a hunk who prided himself on his ability to look like a more robotic Antonio Sabato, Jr. despite the world having ended, this literal tear in his toned and tanned image caused him to have a little rageface going on and an understandably violent reaction.

As a follow up to Rush, A Man Called Rage is quite restrained, with a couple of extended and nondescript action sequences (Rage vs. the soldiers, Rage vs. Slash’s goons at Slash’s place, the overlong and repetitive fight with Slash’s forces on the train) with great swaths of the movie devoted to the Ragetastic Jeep cruising here and there through routine boring countryside, trying to avoid Slash and find Alpha Base. Nothing of note is encountered on their bland mission (with even blander results) and even Slash isn’t much in the way of the over the top dystopian despot these sorts of movies usually excel at (he’s just greedy). And Rage just seems way too cheerful to be a survivor of the apocalypse, especially since his name is Rage!

But in true Italian exploitation style where failure, underachieving and just a plain lack of ability are often times rewarded with more chances, Bruno Minniti (Rage), Werner Pochath, the guy who played Slash would team up again with Toninio Ricci 2 years later in Days of Hell!